Every once in a while, you come across a design or idea that takes a technical concept and embues it with human processing. Suddenly that complicated, complex thing becomes relatable and simple.

I don't know about you, but to me that's about as nonsensical as it gets. Sure, I know these are coordinates for latitude and longitude (because I copied them from Google Maps), and, yes, it's insanely precise, but these numbers aren't relatable. Only GIS specialists and cartology wonks would pick up on the meaning without prompting. While I may have memorized pi to 20 digits during boring high school math clases, people generally aren't very good at remembering digits.

Think about it. How many phone numbers do you have memorized these days? Before the advent of smartphones we were all forced to create a mental rolodex of all our favorite people. Now? I think I know my own phone number and that's about it. We've offloaded that memory burden to technology.

Geoposition systems are slow to transform. Sure, the UK has as very clever system for their postcodes that allows for precision beyond the US system of zip+4. Or maybe it's just as precise. I have no idea and the point is it doesn't matter. I have no idea what my zip+4 is and, frankly, I don't care.

This is the same general location for our offices as the lat/long above, but written in the format of what3words. This is very clever. I love this. It's a memorable, human way to communicate the three square meters I sit in every weekday. They've done this crazy thing of mapping the entire globe into teeny tiny squares so we can get somewhere, find something or just plain communicate in a way that is simple and concise.

I mean just look at this chart from the w3w site: 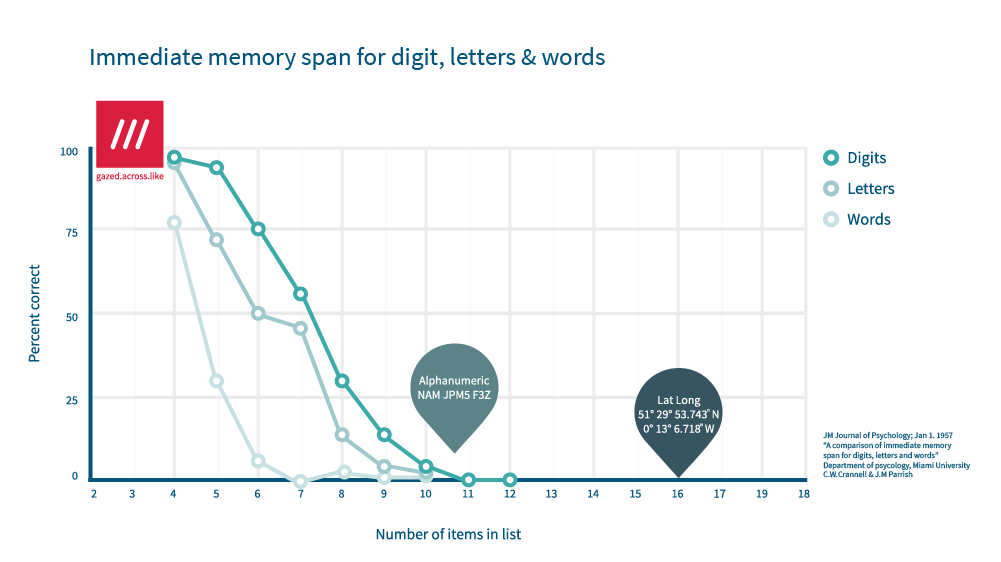 This diagram says it all. People, who actually know how people think, decided to build a system that worked... for people. My only question now is, "Why did it take so long to get here?"

More from border: none;